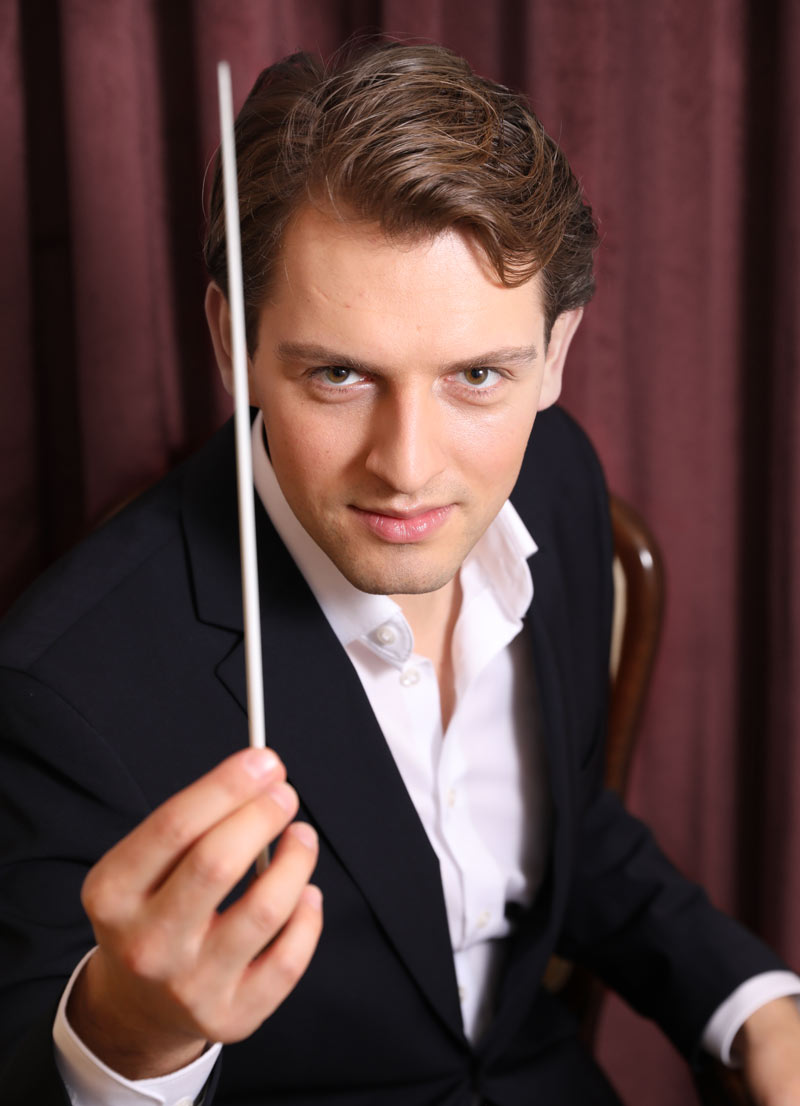 Hermes Helfricht has worked with a wide variety of European orchestras covering a broad repertoire from Baroque to several world premieres in contemporary music. Since 2018/19 Helfricht has been working as 1st Kapellmeister at the Bonn Opera. So far, his talents have been honoured with three international conducting awards. Current projects at the Bonn Opera include a new production of Verdi’s Don Carlo in fall 2021 as well as Frankenstein’s Li Tai Pe, set to premiere in spring 2022.

Helfricht was born in Radebeul in 1992, a small town near the baroque city of Dresden with its deeply rooted tradition of romantic music especially from Wagner and Strauss. Already from a young age his musical talent started to evolve as a pianist. For nine years during his adolescence, he was a member of the Dresden Kreuzchor, gave his on-stage debut as one of the boy soloists in Mozart’s Magic Flute (Die Zauberflöte) at the Komische Oper Berlin, and became assistant to Kreuzchor conductor Roderich Kreile as choir prefect. In 2010 he was awarded the Rudolf-Mauersberger scholarship.

At the Berlin University of the Arts (UdK) he studied orchestral conducting with Lutz Köhler and Steven Sloane. In addition, he played piano trios and quartets in the chamber music class of the Artemis Quartett. Moreover, he matured into a sought-after lied accompanist, his talent being promoted and further moulded by famed singer Peter Schreier.

At only 21 years old Helfricht took part in the DIRIGENTENFORUM of the German Music Council (Deutscher Musikrat) in the section Maestros of Tomorrow. With the support of the scholarship of that programme he participated in highly educational masterclasses with important maestri. During that time Tugan Sokhiev invited him to become his assistant conductor at the DSO Berlin (Deutsches Symphonie-Orchester).

His remarkably versatile profile has allowed Helfricht to work with numerous renowned orchestras. With the Bruckner Orchester Linz (Austria) he debuted in 2013, a collaboration that found continuation in 2016. In Germany he conducted a tall number of orchestras, such as the Bremer Philharmoniker, the Deutsche Staatsphilharmonie Rheinland-Pfalz, the Staatskapelle Halle, the Bochumer Symphoniker, the Robert-Schumann-Philharmonie Chemnitz, the Brandenburgisches Staatsorchester Frankfurt, the Philharmonisches Orchester Heidelberg, the Mecklenburgische Staatskapelle Schwerin, the Philharmonie Neubrandenburg, the Kammerakademie Potsdam and the Württembergisches Kammerorchester Heilbronn. Further engagements in Europe led him to the Vanemuine Symphony Orchestra (Estonia), the Zielona Góra Philharmonic (Poland), and the North Czech Philharmonic (Czech Republic) as part of The Young Prague Festival.

In Spain Helfricht gained exceptional work experiences, where he was trusted with two world premieres as assistant conductor of the Joven Orquesta Nacional de Espãna in 2014 and 2016: Maui by Alejandro Moreno and La Rutina de lo Inivisible by Alvaro Martinez Leon.

The next milestone in his artistic career was an engagement as Kapellmeister at the Theatre Erfurt. During his time there he conducted Bizet’s Carmen, Lehár’s Das Land des Lächelns (The Land of Smiles), and Lloyd Webber’s Evita. In February 2016 he debuted with Tchaikovsky’s Eugen Onegin at the Theater St. Gallen (Switzerland) and was instantly offered the position as first Kapellmeister. There, in addition to numerous concert performances, he conducted Mozart’s Le nozze di Figaro, Beethoven’s Fidelio, Verdi’s Nabucco, Puccini’s Tosca and La Bohème as well as Martin’s Vin herbé.

From September 2018 Helfricht has been employed as 1st Kapellmeister at the Bonn Opera. At this house he has led productions of Ponchielli’s La Gioconda, Janáček’s Die Sache Makropulos (The Makropulos Affair), Ullmann’s Der Kaiser von Atlantis (The Emperor of Atlantis), and Sciarrino’s Infinito Nero. Not only have those performances been met with great enthusiasm from the audience, but also performances of pieces such as Wagner’s Lohengrin, Mozart’s Le nozze di Figaro and Die Zauberflöte (The Magic Flute), Humperdinck’s Hänsel und Gretel, Puccini’s Madame Butterfly and Bernstein’s West Side Story have been widely successful.

The Corona pandemic unfortunately led to the cancellation of Tchaikovsky’s Eugen Onegin and Britten’s Death in Venice, both of which were scheduled for spring 2020. But his newly edited version of Cavalli’s La Calisto was not only highly acclaimed by the international press but also was a massive success with the audience when it premiered in October 2020.

During the season of 2021/22 Helfricht is set to conduct the premieres of Verdi’s Don Carlos and a newly rediscovered opera by Clemens Freiherr von Frankenstein Li Tai Pe (The Emperor’s Poet). Invitations as a guest will take him to the Camerata Hamburg, the Orquesta de Cambra Catalana and the Elbland Philharmonie Sachsen, while he also returns to the Philharmonie Reutlingen and will be doing concerts with the Beethoven Orchester Bonn.

For the season 2022/23 another rediscovery of the opera repertoire is scheduled. Asrael by Alberto Franchetti will premiere in the coming season as part of Oper Bonn’s ongoing series Fokus 33.

As a lecturer, Helfricht has been teaching at the University of Music and Dance in Cologne.

– Please do not alter without consent. –

German conductor, Hermes Helfricht, is a versatile and dynamic young artist with footprints in both symphonic and operatic repertoire. He has collaborated with many European orchestras and was repeatedly entrusted with world premieres. In 2018 he was named the 1st Kapellmeister at Bonn Opera House. He is a laureate of several international conducting competitions.

Hermes Helfricht made his conducting debut in 2013 at the Bruckner Orchester Linz (Austria) with an all-Italian program and performed pieces by Rossini, Mascagni, Verdi and Puccini.
In Germany, he has worked with the DSO Berlin, the Bochum Symphoniker, the Staatskapelle Halle, Brandenburg State Orchestra Frankfurt, the Philharmonic Orchestra Heidelberg, the Mecklenburgische Staatskapelle Schwerin, the Neubrandenburg Philharmonic, the Kammerakademie Potsdam and the Württemberg Chamber Orchestra Heilbronn. Further engagements were with the Vanemuine Symphony Orchestra (Estonia), the Philharmonic Zielona Gora (Poland) and the North Bohemian Philharmonic Teplice at the Young Prague Festival (Czech Republic).

Hermes Helfricht has been assistant conductor with the Spanish National Youth Orchestra from 2014 to 2016 and performed two world premieres, “Maui” by Alejandro Moreno and “La Rutina de lo Invisible” by Alvaro Martinez Leon.

In 2015 he conducted the „Orchester 1770“ at the Musikakademie Rheinsberg and led the Kammerphilharmonie Graubünden in a production of Die Fledermaus at the Schlossoper Haldenstein.

In the 2015/16 season, Helfricht served as Kapellmeister at Theater Erfurt and led performances of Carmen, Das Land des Lächelns and Evita. In February 2016 Helfricht has debuted with Eugen Onegin at Theater St. Gallen (Switzerland) and was appointed 1st Kapellmeister. Since then he has conducted Le nozze di Figaro, Fidelio, Nabucco, Tosca, La Bohème and Le Vin herbé.

In the 2017/18 season, Helfricht was invited to conduct symphony concerts with Qatar Philharmonic Orchestra and Magdeburg Philharmonic. Furthermore he appeared with Beethoven Orchestra Bonn and the Württemberg Philharmonic Reutlingen.

The following year he gave debuts with Bremen Philharmonic Orchestra and State Philharmonic Rheinland-Pfalz. Furthermore he conducted the StateYouthOrchestra Schleswig-Holstein and the Württemberg Philharmonic Reutlingen.

For the season 2018/19 Hermes Helfricht changed as 1st Kapellmeister to Bonn Opera House. There he conducted own productions of Viktor Ullman’s Der Kaiser von Atlantis, Ponchielli’s La Gioconda, Janáček’s The Makropulos Affair as well as performances of Die Zauberflöte, Hänsel und Gretel and Lohengrin. In the 2019/20 season he will lead premieres of Scarrinos Infinito Nero und Brittens Death in Venice. Furthermore he will conduct performances of Le nozze di Figaro, Madama Butterfly and West Side Story.

He created a new version of Cavalli’s La Calisto which premiered in October 2020 and was highly acclaimed by the press.

Born in 1992 in Radebeul near Dresden, Hermes Helfricht began piano lessons at age of five and was regularly awarded prizes at youth music competitions. For nine years he was a member of the famous Kreuzchor Dresden and made guest appearances as a boy soloist in Mozart’s Die Zauberflöte at the Komische Oper Berlin. From 2008-2010 he was a choral prefect for the renowned Kreuzkantor Roderich Kreile and in 2010, was awarded the prestigious Rudolf Mauersberger scholarship.
At the University of the Arts in Berlin, he studied orchestral conducting with Lutz Köhler and Steven Sloane and played piano trios and quartets in the Artemis Quartet’s chamber music class. Additionally, he is a sought-after song recital-accompanist and received valuable support from his mentor Ks. Peter Schreier.
From 2013 until 2018, Hermes Helfricht has been a scholarship recipient in the German Music Council’s DIRIGENTENFORUM where he studied with esteemed international conductors.